When I was asked by PDG Cath Chorley if I would take a team of teenagers to Nyumbani I was initially very nervous. Teenagers? Oh no!!! What am I letting myself in for? It’s one thing taking adult teams but being responsible for other folks kids is another. I had already talked to the Interact Club of Inverkeithing High School a couple of times and they wanted to see where the money they had raised for me was going. On thinking this over I then said I would take them provided they found two teachers to come along with us so that I didn’t have to worry about the day to day foibles of the teenage persona.

Alas, no teacher in their huge school was willing to give up two weeks of their holidays to help. It seemed the adventure was in jeopardy until one Mum came along and said she would help to parent the group. Not enough said I. However, I then had a brainwave, my friend, teacher and sadly ex-Rotarian Frances Wilson had been due to take a group out from Montrose Academy and that had been cancelled due to the troubles on the Kenyan border with Somalia and the Westgate bombing. I asked her if she would be willing to come along with our group to use her experience of 37 years teaching and a couple of previous trips to Nyumbani and she jumped at it. Oh boy, I wasn’t going to get out of it after all. I had also promised to take the daughter of one of my fellow Rotarians, PP of Arbroath Rotaract Club, Abbey Scott too.

Okay then, I told the Interacters, we are good to go but I challenge you to raise £3000 before we go to fund the projects you will be doing. This was just before Xmas 2013 and being in that age group they had all their final exams to swot for so I didn’t hold out much hope for that amount. What did I know?

£4107 later, they had done an amazing job, the e-mails came thick and fast, our total is this, our total is now this. Their total ended up well over my expectations so this was the first inkling of what was to come. What had they learned from this? Team building, working closely with people they knew but weren’t necessarily close to, getting parents on board, how to fund raise, how to organise events, handling money and most of all what they themselves are capable of doing. There’s no such word as ‘can’t’ in my dictionary and they learned that too.

A couple of meetings with the parents reassured them that we wouldn’t be working in dangerous areas of Kenya, Nyumbani Village is way into the bush, miles from anywhere and Nyumbani Home is in Karen a relatively safe area, (if anywhere is safe these days) of Nairobi. Not one parent withdrew their offspring which I took to mean they trusted my judgement of the situation in Kenya and I promised them I wouldn’t take them into the slums to work which is the norm.

As Frances and Diane (the responsible parent) were to be going I decided to follow a couple of days later allowing me to attend a family ‘do’ and to fit in with other commitments I came home a day earlier.

The programme I had arranged for the group was well under way when I arrived and after a couple of days settling in to Kenyan ways, doing a bit of sightseeing and wildlife watching they had begun a five day stint in Nyumbani Village. When I visited them they were having a whale of a time. Frances had divided them into two groups and they did many jobs well out of their comfort zones. Shovelling manure out of the cattle boma, milking cows, planting trees, building mud and wattle walls around the Rotary built cooking shelters. They shook out sunflower seeds, sorted meringa seeds for pounding into a powder, gave out weekly rations to our Susus (Grannies) and many more things I wasn’t aware of. They attended an Interact meeting in the High School which they discovered was much more formal than at home but they thoroughly enjoyed the exchange of ideas for fund raising etc. Exactly how the girls in the Village will make cup cakes I’m not sure!

Not one complaint about the food or accommodation was heard and their behaviour was exemplary. Our youngest and smallest member Catriona, aged 16, wanted to stay in the Village for longer as she enjoyed it so much. This time of year is winter in Kenya and although Nairobi is cold and damp the Village, being in an arid area, stays much hotter and one has to be careful of sunstroke and burning.

Nyumbani Village was Fr D’Agostino’s third vision for the care of HIV+ orphans and was only just evolving when he passed away. How he would marvel at the development which has taken place in a relatively short space of time. It has proved to be beyond anyone’s wildest dreams. We now have 100 grandparents in 100 houses with a full complement of over 1020 children. There is a primary school, senior school, a polytechnic teaching practical skills such as woodwork, metal work, hospital repairs and more recently hairdressing. A clinic which, like the schools, serves the surrounding area as well as our Nyumbani children, is a Godsend for people living in such a remote spot. When I visited with my February adult team I was impressed by the new Kjer House which is to be developed into an eco-tourist lodge. The ultimate plan is that visitors to Kenya who wish to go on safari and then sample Village life in the bush will pay to stay for a few days and volunteer practical help at the same time thus raising much needed revenue. My teams this year were privileged to sample finer living quarters for very little cost as the place isn’t quite finished yet. When it is they will have to go back to more basic accommodation. A huge solar garden, commissioned last March, is a very new and welcome donation.

Back in Nairobi after a fun weekend visiting the elephant orphanage, giraffe park and eating pizza our teenagers got down to four days of hard work, completely repainting cottage C, home to 15 children and two surrogate Mums. I had spent the previous week doing the shopping for this (aside from lots of other tasks I never seem to have time to do in Feb/March trips) and furnished them with blue for the boys side and pink for the girls. They set to with gusto and had everything completely done by Wednesday night, a lot of paint ended up on t – shirts, faces and the floor but what did that matter? Faces were cleaned, t-shirts were binned and the floor cleaned and the kids were absolutely thrilled. I will have six sets of new curtains made before I go in February 2015 which will complete the refurbishment and so another job was well done.

The team visited the Rotaract Club of The Catholic University of East Africa at which I was invited to give a talk about ‘Rotary in Action’ and we had lots of fun with a really nice bunch of students. I may have let myself in for another talk next Feb at another Rotaract club!! Next was a presentation by the youngsters at the Rotary Club of Karen at which they did themselves proud and was a dry run for our District 1010 conference presentation in November.

Finally, because a slum walk/visit was not an option this time I arranged for them all to get an insight into the workings of Kawangware clinic, the refurbishment of which was funded by the Rotary Club of Spey Valley and friends and is one of our eight clinics serving the resource poor communities.

In summing up, I have nothing but praise for those teenagers who gave of themselves willingly, diligently and resiliently in the service of those much less fortunate than themselves. Well done, Interactors Catriona, Rachel, Sofia, Lewis and Claire and Rotaractor Abbey, you did us all proud!

As our new RI President Gary C.K. Huang quoting Confucius said ‘It is better to light a single candle than to sit and curse the darkness’. Interactors, Rotaractor you certainly lived up to that challenge admirably and ‘Lit up Nyumbani’ 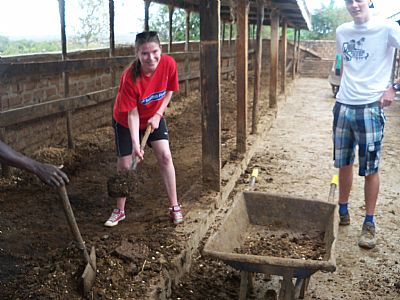 Mucking out the Cowshed 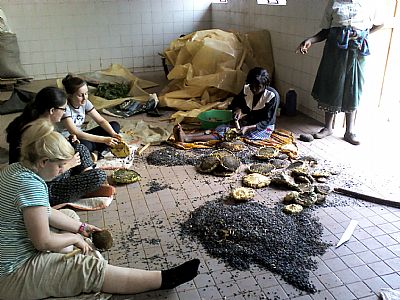 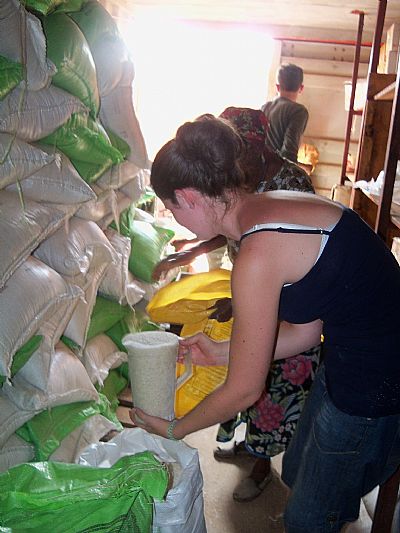