An almost entirely Scottish team this year, save for my soon to be daughter in law’s younger sister Laura, set forth from London Heathrow on 17th Feb to, for over half the team, a completely new adventure. The others had been with me in 2011 and had found their own projects within the Nyumbani umbrella they wished to pursue.

Ian Grieve, R/C of West Fife, Jim Aitken, R/C of Inverkeithing & Dalgety Bay and wife Maureen, John Hay R/C of Spey Valley, Sara Gilmer from Edinburgh, Marion Walker of Montrose and Laura Spencer from Salisbury were our new guys and gals whilst, Rose Logan R/C of Turriff , husband Jock, Beth Hay (wife of John), Fran Raw of Aviemore and myself the old timers especially me as it was my 10th trip, a huge success it was too.

After many months of fundraising we took a cheque for £18000 mostly for medical equipment for our newly opened laboratory. Alongside this, £3000 from my jewellery and craft sales enabled us to do various projects outwith the main ones.

I sent six of the team to Nyumbani Village for four days where they worked their socks off and managed to erect ten cooking shelters for our Susu’s (grannies). The climate in Kitui district is very arid so they found it very hot work and the living conditions basic but nevertheless did a grand job which took the total to 21 erected by our teams in two trips. Listening to their many stories it seems they never stopped laughing and having fun.
With the whole team gelling so well my work was made so much easier and for that I want to give them a huge pat on the back.

Of the six left behind in Nyumbani Home, Beth, John and Fran set off to Kawangware Clinic where Beth had worked last year. She had promised the staff she would return to refurbish the whole place and so she did. They repaired the ceiling, completely repaired and painted and tiled throughout, working all through the rest weekend so that the floors would have a chance to dry without the staff tramping on them. I was most impressed by the amount of work the three of them had managed to do. Beth and I, with money from Spey Valley club and my jewellery sales, funded the building of a large extension to the waiting area for use as a store.

That left Rose, Maureen and I to undertake the refurbishment of the old laboratory (7 rooms in all) into a child friendly medical centre. Well, as luck would have it on the second day we were there, I managed to wreck my knee when I fell up a couple of steps. What a mess, the bruising went from toe to thigh and of course got me out of scrubbing floors etc!!!!!! I eventually ended up in Nairobi Hospital with a suspected fracture of my kneecap and had to have CT scans etc etc. However Rose and Maureen got going and were joined on the second week by Laura, Marion and Sara and did a magnificent job whilst I did things like making curtains, bedspreads, all the shopping for materials and anything I could do with my leg elevated. Not! I was very proud of the end result as you will see in the photo of Nurse Mercy.

The lads then went to Kangemi Clinic and erected a waiting area shelter and on to Dagoretti Clinic where they built shelves and cupboards for the pharmacy much to the delight of Sr Little who is back nursing, her ongoing illness being in remission for the time being. The only thing they didn’t have time to do was a paint job in the pharmacy. I hear a celebration party took place at the end of it.

Alongside all that Sr Mary and I took the girls and John to Nyumbani village to experience a day in the life of our completely uneducated grannies who for the first time in their lives have a proper house to live in (as opposed to a mud and wattle hut) where their grandchildren can have a modern education yet be brought up to uphold the traditions of their elders. To date we have 895 orphans, 80 grannies and just 2 grandpas. We visited our District 1010 cluster of four houses with Susu’s Monica, Jadida, Kuvoko and Elizabeth who immediately recognised me and much rejoicing from both sides ensued. They were each provided with a rabbit hutch 2 does and a buck and are undergoing training to teach them how to breed and therefore feed their grandchildren one meal with meat once a week. I was delighted that Ian was with us this time as his club funded one house which I had called West Fife and he got to see first hand what joy and dignity they had brought to one destitute family. One of the biggest problems at the moment is to get our Susus to turn off the water taps. Totally uneducated they are used to a river flowing and when it dries up they just walk miles to the nearest borehole. That has been their lives until now, they find it hard to understand that if they turn off the taps they will always (please God) have water. The highlight of this visit was the naming of the Arbroath Block of four teacher’s bedsits. I have transferred to the R/C of Arbroath since last trip and I thought it would be good to let them choose the names so they are: Abbey, Bell Rock, Declaration and of course Smokie. District 1010 and friends came up trumps again to fund them last year.

Our literacy project continues with enough Dictionaries4Life left for another two years supply. Standard 7 pupils get one of these each both in Hotcourses Primary School and Nyumbani Home.

Lastly but not least I had the pleasure of putting up a plaque in our new Diagnostic Laboratory to honour District 1010, R/C of Uxbridge & Kenyan Orphan Aid Ireland for funding the Genetic Analyser which is up and running and saving lives. The laboratory is striving to obtain international accreditation and takes in tests from hospitals in East Africa which in turn raises revenue for Nyumbani.

Aside from all this we visited R/C of Karen which is always a pleasure and went to a joint meeting between R/Cs of Hurlingham, Nairobi North and Mashariki which I can only say was a dubious pleasure.

My team spent a lot of time raising money before the trip and worked very hard in the heat and the dust whilst there but they also had lots of fun and found it an amazing, humbling experience. The visit by the new girls into the slums to visit with families in our Lea Toto programme was life changing and will stay with them forever.

Finally my very best thrill was to be asked by Nurse Mercy to name our newest child found abandoned on a bus (imagine the distress his mother had been in to have to do this). Thought to be about two and a half to three years old, he will be baptised with an African name and the name of my youngest son who is to be married this year. Nyumbani now has its first child with the really Scottish name of Hamish! I feel a family sponsorship coming on! Oh well, as hooked as ever, I will return. 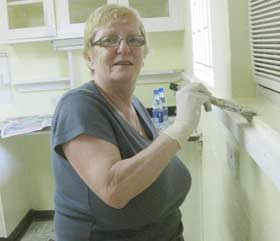 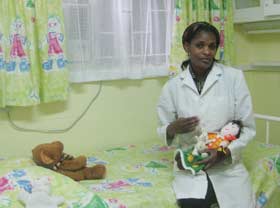 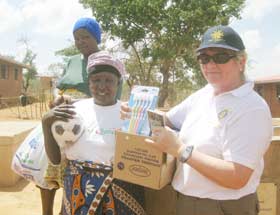 Giving our Susus some goodies 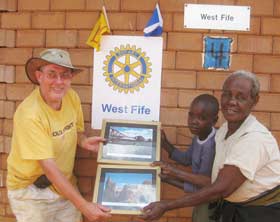 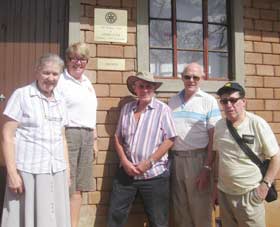 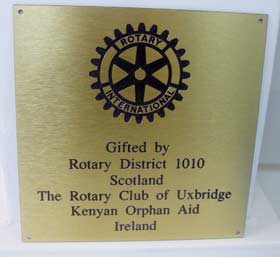 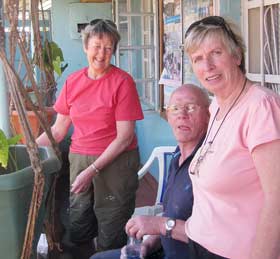 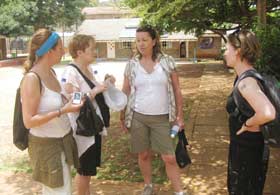 Reflections after a slum visit 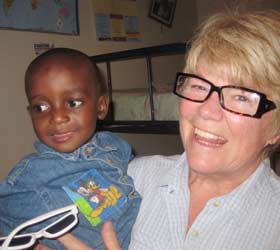